In my last article, I mentioned a little cafe in Mount Glorious called the Elm Haus. Well yesterday Karen and I made a special trip up the mountain to try their Devonshire tea, having left Xander with his grandparents. We’re delighted to say that it was well worth it.

The cafe is nestled in a grove of tree ferns by the Maiala rainforest. This setting immediately conveys a sense of calm, a feeling enhanced by its cozy interior. Although it was a perfect day to sit on the deck outside among the tree ferns, Karen and I found a comfy couch inside to lounge on.

It’s counter service at the Elm Haus. We wasted no time in ordering two Devonshire teas – after all, that’s what we came for. 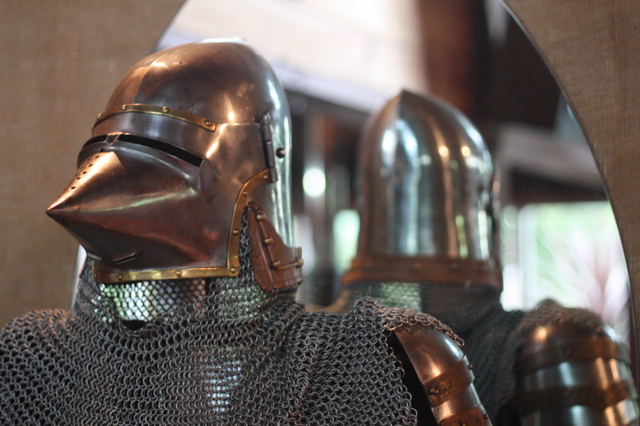 While waiting for our tea and scones, we wandered around looking at the various curios on display: an old typewriter, this knight in shining armour, an array of preserved snakes and insects (in the nook off to one side, so they’re not in your face while you eat), and a host of other knick knacks. If you want, you can also play a game of chess, draughts or backgammon. In many respects, the Elm Haus shares a similar ambience with Three Monkeys in West End, despite the more open layout.

The Elm Haus resembles a church in its construction, with high ceilings and arch windows. Of course, it’s possible the Elm Haus was a church at some point in its life. The Putumayo CD playing in the background certainly benefited from the acoustics of the place.

With a Devonshire tea, presentation plays a big part, so I was encouraged when I saw the two scones neatly arranged on a plate with a little twin pot for the jam and cream. As usual, we ordered English breakfast tea. It was real leaf tea served in a small tea pot.

The Elm Haus Devonshire tea comes with two scones: one plain scone and one sultana scone. Both delicious. All the more so because they served us real cream, not that whipped stuff from a can, which some other establishments that shall not be named have deigned to serve us in the past. 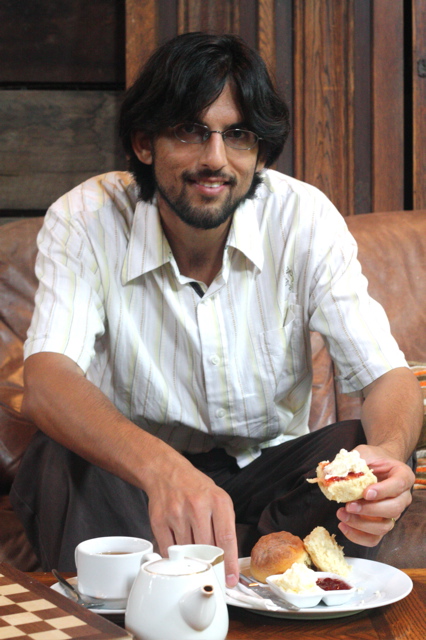 We were so comfortable at the Elm Haus that after our Devonshire tea we ordered some home made potato wedges to share, and I had a latte. I wouldn’t normally spoil a perfectly good Devonshire tea by having a latte straight after, but since we were hanging around, we needed to order something. Anyway, the latte was good, and you’ll be hard pressed to find better wedges anywhere!

Karen and I rate the Elm Haus’s Devonshire tea highly. In fact, we’d go so far as to say that it’s the best we’ve had in south-east Queensland so far, all things considered. Having eaten lunch at the Elm Haus previously, we can also vouch for the quality of the chicken pie and the house special burger. The friendly staff prepare your food quickly and with an eye for presentation (even the wedges looked a treat), and serve you with a smile.

So next time you’re in the D’aguilar Range, I heartily recommend that you stop off at the Elm Haus for good food and a relaxing time.